What would you do if you ever find yourself falling in love with the wrong man?And by 'wrong man' I mean the scariest man ever, whose world is totally different than yours?


Death, just like his name, had grown up in a world surrounded by evil & death. He never knew what love is, never knew what it's like being touched by someone who cared or worried for him. He thought he had his older brother for that but with time, he proved him wrong. All he ever dealt with was the world of the dead, that is until he meets Pollie. A blind innocent girl that rocks his world in first sight. He wants to protect her, take care of her, lock her away with him and never let go.


Death confuses Pollie. He shows her so much warmth and comfort but doesn't reveal what he does for a living. He doesn't know how to deal with the feelings he has for her, what makes him more frustrated than he already is.
Pollie also struggles with her emotions. She knows he's not the right guy for her but something makes her stay with him, something stronger than her. 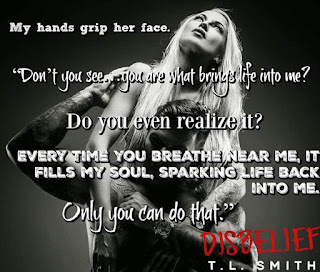 Like every one of T.L.'s books, I loved it.
It was dark (a bit too dark for me this time), twisted, funny (Anton cracked me up) and soooo hot! I can't wait for the next book in this series about Victor.
It's going to be a blast! :-)