From the Wreckage by Melissa Collins (ARC review)

"Where were you on 9/11?" was the first thing that crossed my mind hearing about this amazing book.  I remember every single moment of that horrible day and even though I'm not an American, I felt the pain and loss of all those good people who lost their lives on that day.

As an Israeli who lives in fear every single day because of terror, I couldn't ignore the special dedication of this story and sighed up almost immediately for receiving an ARC.
From the Wreckage - is a story about love, strength,  destiny  and saving each other from the wreckage of life.

Grace and David knew each other when they were children. Good friend and neighbors at the age of 6 and 10, they already knew the meaning of saving lives.
On one horrible night, Grace's house was burned to the ground and she nearly lost her life trying to escape it with her parents. David was the one who found her almost lifeless body and saved her before it was too late. Under the circumstances of no house to live in, Grace had to leave with her parents and separate from her knight in shining armor.
18 years have gone by with thinking about each other and never reconnecting, they meet again, this time as adults. 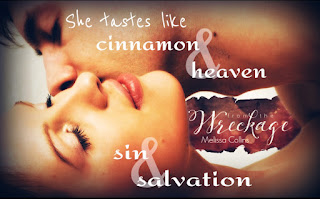 David, hot sexy dreamy firefighter David (turn on the AC ladies!) , who chose his career on that awful night 18 years ago that defined  his life and 9/11 attack that stamped his choice as a sure thing , falls madly in love with HIS Gracie and does whatever he can to protect her and make her happy. Gracie , being all insecure with herself, can't believe that the boy that became the man of her dreams, is really HER David. The pull for one another is so strong that they can't resist it and start living their lives as a loving couple. 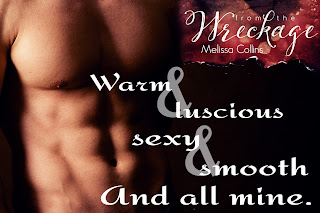 Being  in the best stage in her life with a new dream job, new car and apartment and a dreamy hot boyfriend, Grace can't shake the fear of David's "running into burning buildings" job that takes place in her heart.  As much as David's efforts to assure her that he made the right choice of career, the fear is always there. But when that becomes real  and their perfect loving bubble burst, nothing stays the same…

This is the first Melissa Collins's book I have ever read and I'm so thankful for that. She is a master in turning feelings in to words and I felt every little high and low that the characters had.  My heart skipped a bit so many times and in all that emotional ride, there were a few parts that I just couldn't stop laughing.  As I said – emotional ride! 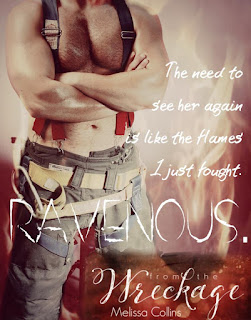 Thank you Melissa for this beautiful story that will stay with me forever and thank you 9/11 firefighter for leaving such an amazing legacy for the future generation!

The prequel to From the Wreckage is now FREE: